What makes a good LED headlight bulb? The technology explained.

LED bulbs like these aren't actually DESIGNED for headlight applications specifically - they are simply designed as universal bulb replacements that do their best to mimic the function of a halogen automotive light bulb.

Sometimes these bulbs are used in headlights, other times fog lights, other times on boats, ATV/UTV, industrial vehicles and more. Before you dive into the world of LED bulb upgrades, get your facts straight! No matter how much better 1 bulb style is than another, keep in mind that none of them are currently street legal for use on roads in the USA. There are plenty of applications where they're fine to use like fog lights, a dedicated off-road application and more, but make sure you're following the rules! For information on LED bulb street usage click here. 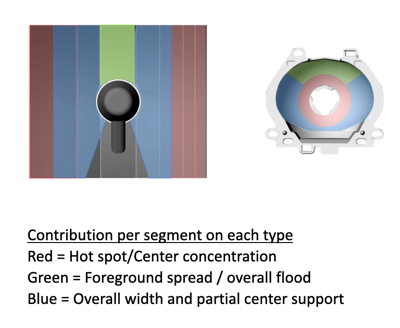 We learned directly above the illumination range with typical LED bulb configuration is the "dead angle" range.

This design flaw exists in any LED bulb that has 2 LEDs facing out.

H4 dual reflector has two segments: upper half creates low beam with cutoff, and Bottom elements are for high beam. For the H4 bulb's low beam, the filament will not illuminate the high beam. The H4 bulb is designed with a glare control shade shield. 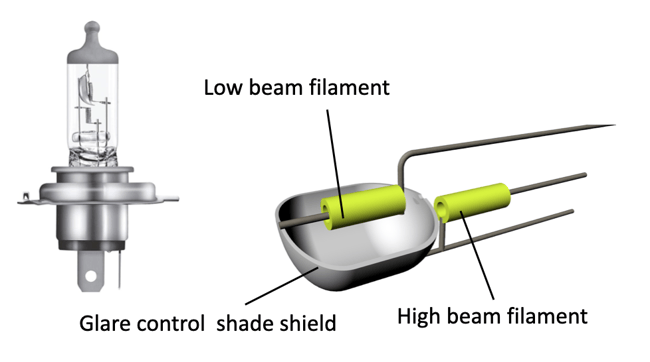 With the shade shield cup blocking the lower illumination angle, the H4 bulb's low beam filament can safely and selectively illuminate the blue-colored area (image below). 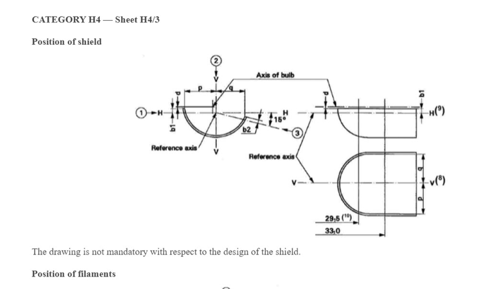 Since filament has a 1.4mm diameter, rays from the filament peak can reach a slightly lower angle than the primary ray group. Yellow is a marginal region to accept such a group. 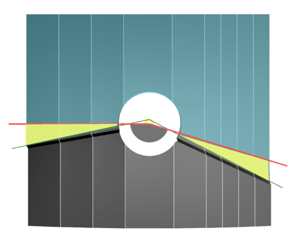 Ideal H4 illumination distribution shall look like the Blue-highlighted zone (above).

The goal is not to create glare. All aftermarket H4 LED bulbs are equipped with shade cups, but the problem is an unregulated LED chip, and shade cup placing does not ensure proper glare cut. 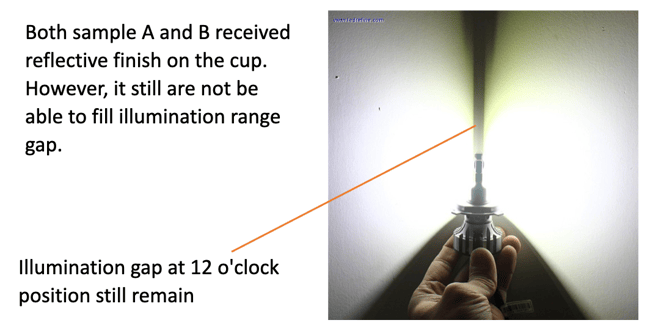 Generally, shade cups receive the light created by reflections, which some say enhances illumination efficiency, but none of the products aim to fill the illumination range. They are bouncing the reflection around, which does not optically illuminate the target surface.

Both samples A and B received a reflective finish on the cup. However, it still does not fill the illumination range gap. 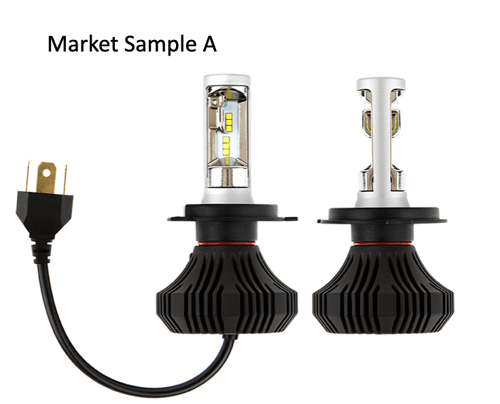 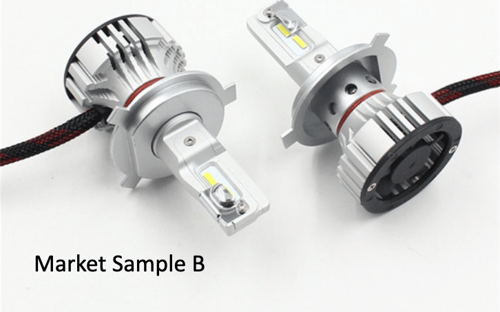 Since the product misses the 12 o'clock illumination range, there's a lack of foreground illumination spread. Not many bulbs control glare properly (LED chip selection is improper), and the reflector can not utilize unregulated reflections. 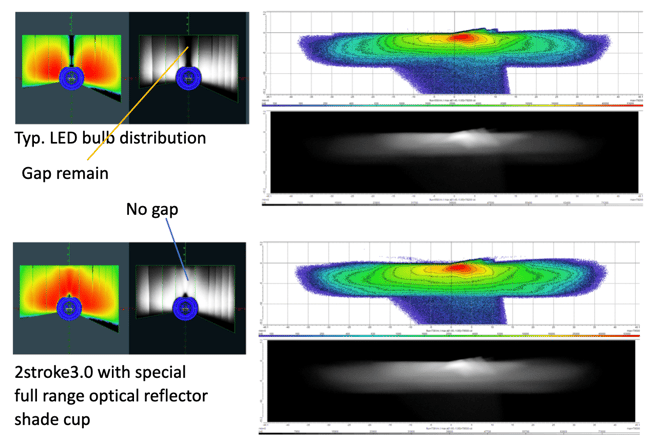 The second virtual illumination point size needs to be the same as the first light-emitting surface because the optics are designed based on the H4 halogen filament illumination character. 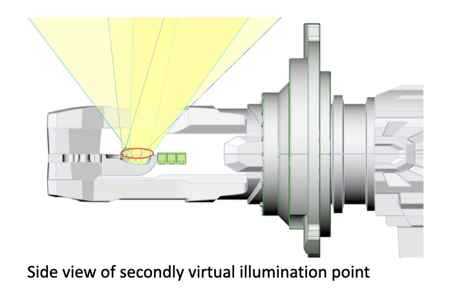 This unique virtual illumination point generator can be only possible with the 2stroke 3.0's unique cooling system, which allows LED's light-emitting surface interval to be only 2.4mm( thinnest in Market * single filament model is as light as 2.0mm)

Unlike other LED bulbs that rely on the heatsink for thermal conductivity and front bridge material conduction, our unique cooling system uses the PCB itself as one of the central heatsink fins, which allows the bridge to be much thinner.

The 2Stroke 3.0's lighting output is about 40% less than the Ultra2, but it has an unbeatable focus that contributes to road illumination that often exceeds Ultra2, especially in smaller to mid-sized reflector housing.

I do not hesitate to suggest Ultra2 and SV4 for larger optics while also weighing the pros and cons of either.

2Stroke 3.0 will remain top in terms of beam quality regardless of optics.

How Do I Properly Measure Lux?

Lux reading only can be a valid reference IF measured in the same distance and measured at the same measuring spot in the same optics system. For example, at 10m, the Lux rating maybe 500 lux but becomes only 347 lux at 12m.   (Want to know more about the difference between Lux and Lumen? Check out this blog.)

Having higher lux in one optics does not mean it will have higher lux in another housing. The Lux rating will vary with certain applications and distance measurements.

The proper answer is:

2,100lm is the minimum output number in a heated, controlled environment. Many LED bulbs advertise a theoretical absolute max number but won't tell you the actual outputting lumen.

2ST3 was run in a 60C(140F) heated oven for 1 hour and then measured in a device called an integrated sphere to assure the minimum of 2,100lm is outputting.

In theory, max output from a 2 x HKL351.TE emitter can be 4,800lm (If we want to state lumen rating as most cheap LED bulbs packaging describes).

Unless it is measured in proper equipment, lumen rating is a volatile marketing number. It is OK to admit that there are actually higher lumen outputting bulbs. We did not choose that fight because the Ultra 2 and SV4 have much more depth in true optical strength.

How does the 2Stroke 3.0 lux measure have a higher output than Ultra2 or SV4 in some housings?

This is because the lumen density of LED is much higher than the other two. HKL531.TE emitter has a near-identical size of filament emission area.

For a larger chip LED bulb like Ultra2, a near filament-sized box is illuminated as an accidental overlay that overlaps the intended beam pattern. The amount of overlap is uncertain; some overlap adds intensity, some do not, and they cannot gain intensity. That is the probability difference you see in a variety of optics with large housing.

Also, the LED typically shoots stronger illumination at a straight angle, while the filament is full 360-degree illumination. This is a disadvantage in terms of the full-beam distribution range. In the reflector housing's case, the 2Stroke 3.0 shoots a much stronger beam because of this angle limitation. The outer segment of the reflector handles a hot spot of beam distribution. The 2Stroke 3.0 LED chip has a relatively higher output ratio into 3 and 9 o'clock (the hotspot's corresponding reflector segment), resulting in a much higher beam center focus, even from the same lumen outputting halogen bulb.

Con: The lack of foreground illumination. Directly above the segment handle, there's a lower angle flood beam in the reflector.

Does the 2Stroke 3 work well in projector housing?

Much less efficient compare to a reflector. In projector optics, the hot spot is handled by the center back area of the reflector bowl, where all LED bulbs fail to illuminate directly above because of the shadow at 6 o'clock illumination).

Some projectors are composed of beams using an "overlap" construction. Some larger chip LED bulbs may positively (accidentally) achieve higher beam center focus due to this effect.

Projector performance will be case by case. However, how the beam center overlap is designed will determine how effectively the 2Stroke 3.0 can perform in a projector.

Will dust get in the internal circulation cooling?

No. It is a fully internal closed-loop circulation. However, it is critically important that the customer "seal the housing" if the headlamp comes with a dust cap cover. It must be advised as a "warning" not to use the 2Stroke 3.0 bulb if the customer cannot properly install the dust cover. Leaving an opening will cause dust to enter the headlamp, and the bulb can blow the dust around inside. This is not a product-level issue since headlamp housing never should be left open, but I can see some customers using it without a dust cap or cover.

If dust cover incompatibility is reported, suggest a compatible-sized rubber dust cover along with the product recommendation.

What is the tension spring on the H11 bulb?

The tension spring creates a specification defined downward retaining force of 5Nm. The bulb insert is slightly larger than the bulb base diameter for installation tolerance. Other than the H11 type of bulb(H13 also supposed to have a tension spring but did not make it this time), the self-gasketing bulb has an o-ring gasket around the bulb base collar, and it goes into the bulb insert opening to fill the gap.

This is essential, especially because we use the high-precision LED chip.

2st3.0 is the ONLY LED bulb with a rotatable bulb base collar WITH specification defined tension spring equipped.

A Twist-lock type bulb uses a geared-step adjustable bulb base collar. Due to design limitations, there is a dead-angle (where the entrance angles) in the geared step adjustable type. We will monitor market popularity feedback and may add an optional in-between angle collar.

For spring retainer install types (such as H7, H4, etc.), bulb base collars are full-range free rotation. The position is retained by triple friction o-ring gasket inside.

This video also does a good job at offering a high-level overview of the technology explained here: