As the saying goes “Power is nothing without Control” – so why bother installing HID’s in your headlights without the proper fixture to capture and focus that powerful light into a controlled beam pattern and spread it out on the road ahead? Projectors are the most important component when it comes to a headlight upgrade, and due to the huge variety of available models out there, choosing one can often be confusing.

From different brands, makes, models, origins etc – the one thing you should know is that regardless of the projector you use, your light output will not only look better than “that guy” with the cheap HID kit thrown in his stock headlights, but will also perform considerably better. By concentrating all of the available light on the road where you need it rather than scattering it into an unfocused blob – put simply, your headlights are brighter when they have projectors. When it comes time to pick out a projector for your headlight retrofit, there are enough options to make your head spin.

This choice is completely based on how your headlights are set up now. Do they use a single bulb with two filaments to produce the low and high beams? Or, do they use one bulb for the low beam, and another bulb for the high beam? If the vehicle uses two bulbs, then you can use a low beam or a bi-xenon projector. If the vehicle uses a single “dual filament” bulb, then you must use a bi-xenon to retain the full functionality of your low and high beams.

2. HOW COMFORTABLE YOU FEEL MODIFYING YOUR HEADLIGHT ASSEMBLIES?

Now that the choice is clear between needing a bi-xenon or not, we should consider the ease of installation. Are you looking for something that is as easy as possible to install, or are you looking to get your hands dirty on the retrofit even if it means major modification to the headlights is required? When it comes to installation requirements, there are two basic kinds of projectors :

Conventional — which will require a considerable amount of cutting to the stock headlight and are more difficult to align correctly. Examples include the FX-R, TL, TSX, S2K, RX330, LS430, etc.

Morimoto Minis — (H1 and D2S), where the bulb holder doubles as a mounting shaft. This threaded shaft fits through the pre-existing hole in your reflector bucket (where the halogen bulb comes through) and clamps down with a variety of hardware. Much easier to mount and align.

3. SIZE COUNTS! HOW BIG ARE YOUR HEADLIGHTS?

Big headlights — Don’t concern yourself over size too much, you can probably retrofit anything from a tiny Morimoto Mini to a big Lexus LS430 projector. Some examples of vehicles with headlight reflectors that we would consider large are the Toyota Tacoma, Dodge Ram, Honda CR-V, Chevy Cobalt. Many SUV’s and even some cars have “large” headlights. Even if you want to retrofit something easy to install like a Morimoto Mini, don’t let the word “mini” put you off because you think it will look small inside your big headlight. Cover it with a large shroud and the retrofit’s finished appearance would look no different than a larger projector would.

Small headlights — In general, the width of headlight reflectors isn’t much of a concern – but the height profile and depth of certain headlight housings may prevent you from using a big projector. The Morimoto Mini’s are not only good for people who want something that’s easy to install, but they’re also great for retrofits into relatively small headlights. Even if you’re comfortable cutting and making other modifications- sometimes a Morimoto Mini might be the only suitably sized option regardless. Most high beam reflectors are small too, so in the case of a quad retrofit, the Mini’s always make a good choice for at least the secondary projector. Some examples of vehicles with small headlights: Pontiac Grand Prix, Older Chevy Tahoe, sealed beam lamps, 8th Gen Honda Civic etc.

4. The level of performance you desire.

If you want the widest, brightest, sharpest, and most evenly distributed beam of light in front of your car, it’s unreasonable to expect such things from anything other than the best of the best in projector optics. There’s no question that something like a big, expensive Lexus LS430 or Acura TL projector will out-perform a Morimoto mini in most regards – but at the same time, it’s going to cost you much more money, require a ton of extra work to install, and won’t even always fit no matter how you slice it. In the other direction, a Morimoto projector from TRS will pack a huge punch when you consider its price, universality, and how simple it is to retrofit inside your headlights.

As an aside, just because a projector is expensive and requires major surgery to install doesn’t necessarily mean it’s going to out-perform an “easy install” option like a Morimoto. For example, the low beam performance from an Acura TSX projector hardly any better than a Morimoto, but they cost twice as much and will take twice as long to retrofit too. A lot of times, our aftermarket projectors will even out-perform the OEM’s. Modern European cars equipped with headlights from ZKW, Bosch, and Hella are often out-shined by Morimoto HID equipped retrofits.

Just remember, it’s called a retrofit for a reason. The point of retrofitting is to take a projector with desirable output characteristics and modify your housings (to what extent is up to you) to make it fit. 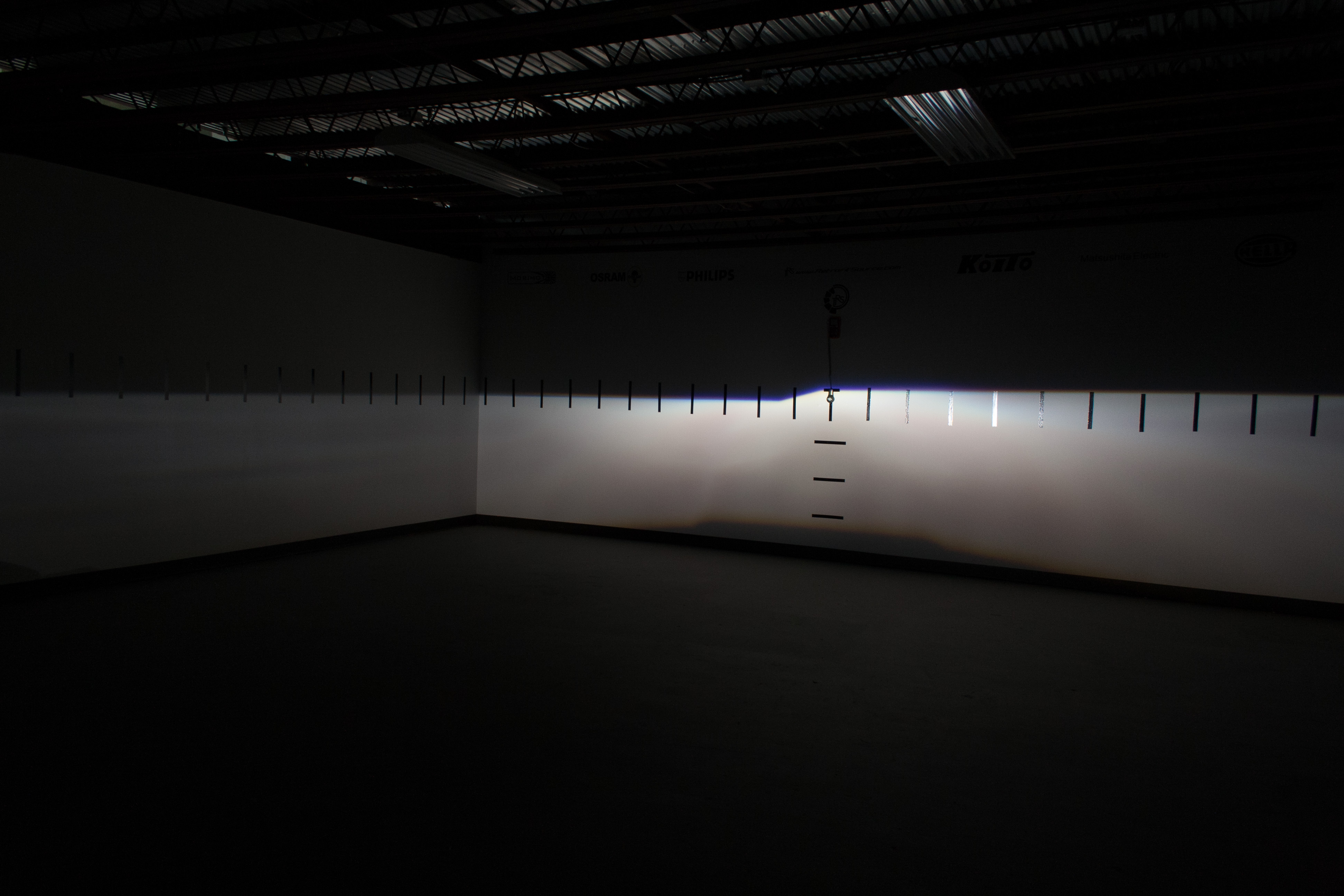 Bi-xenon means each projector has both a low and high beam pattern. Here, the light cutoff shield inside the projector is on a hinge. When powered, the bi-xenon solenoid pulls or pushes this flap/shield down to expose more light through the lens – thus creating the high beam pattern. When the high beam is deactivated, the cutoff shield retracts to its normal low beam position. If you ever researched HID headlights, you probably know its bad to flash an HID bulb on and off repeatedly like you would when using a high beam on a dark road. Bi-xenon projector systems are not subject to this problem because when toggling between low and high beams – the bulb is constantly lit, does not move, get any brighter, etc. The projector creates the high beam, not the bulb.

HID projectors are designed for use with D1S, D2S, or D4S bulbs. The overwhelming majority of projectors use D2S style bulbs. The only HID projector that doesn’t use a D-series bulb is the Morimoto Mini H1, which is designed for use with compact H1 HID bulbs. You must use the type of bulb that the projector was designed for. No, you cannot simply stick the bulb from your old HID kit in the back of a projector and expect it to fit or work well. If you’re using a bi-xenon projector, you do not need bi-xenon specific bulbs. 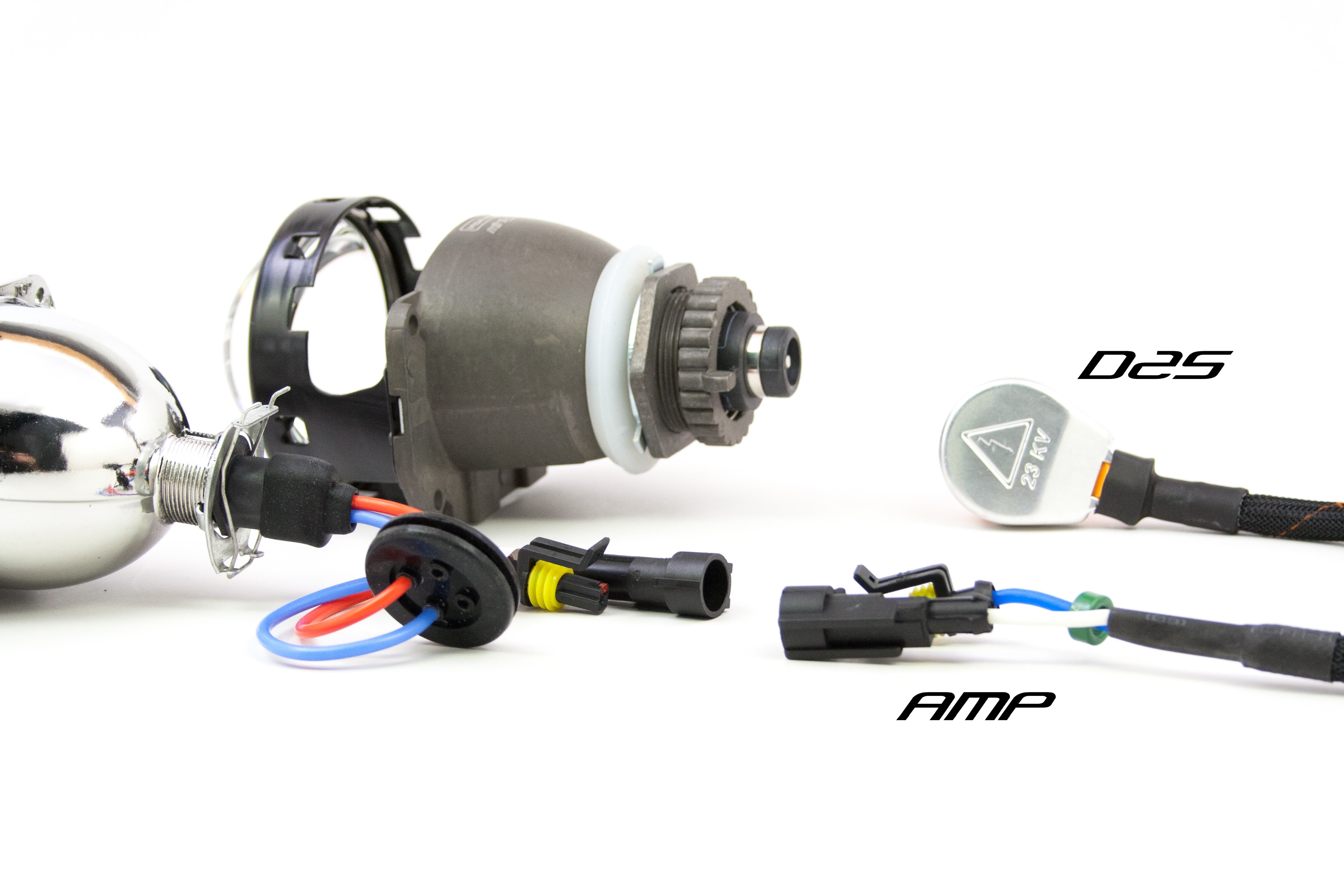 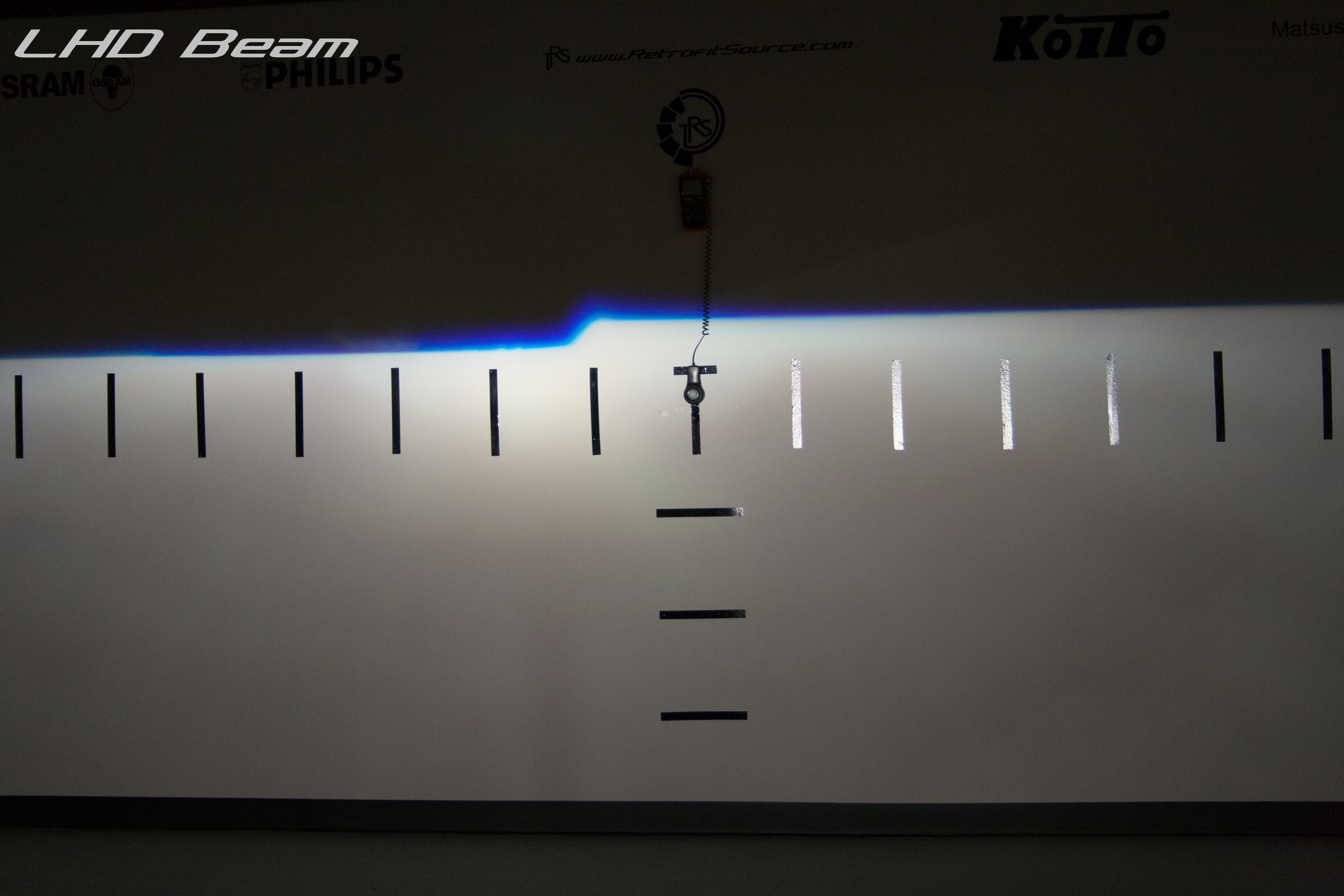 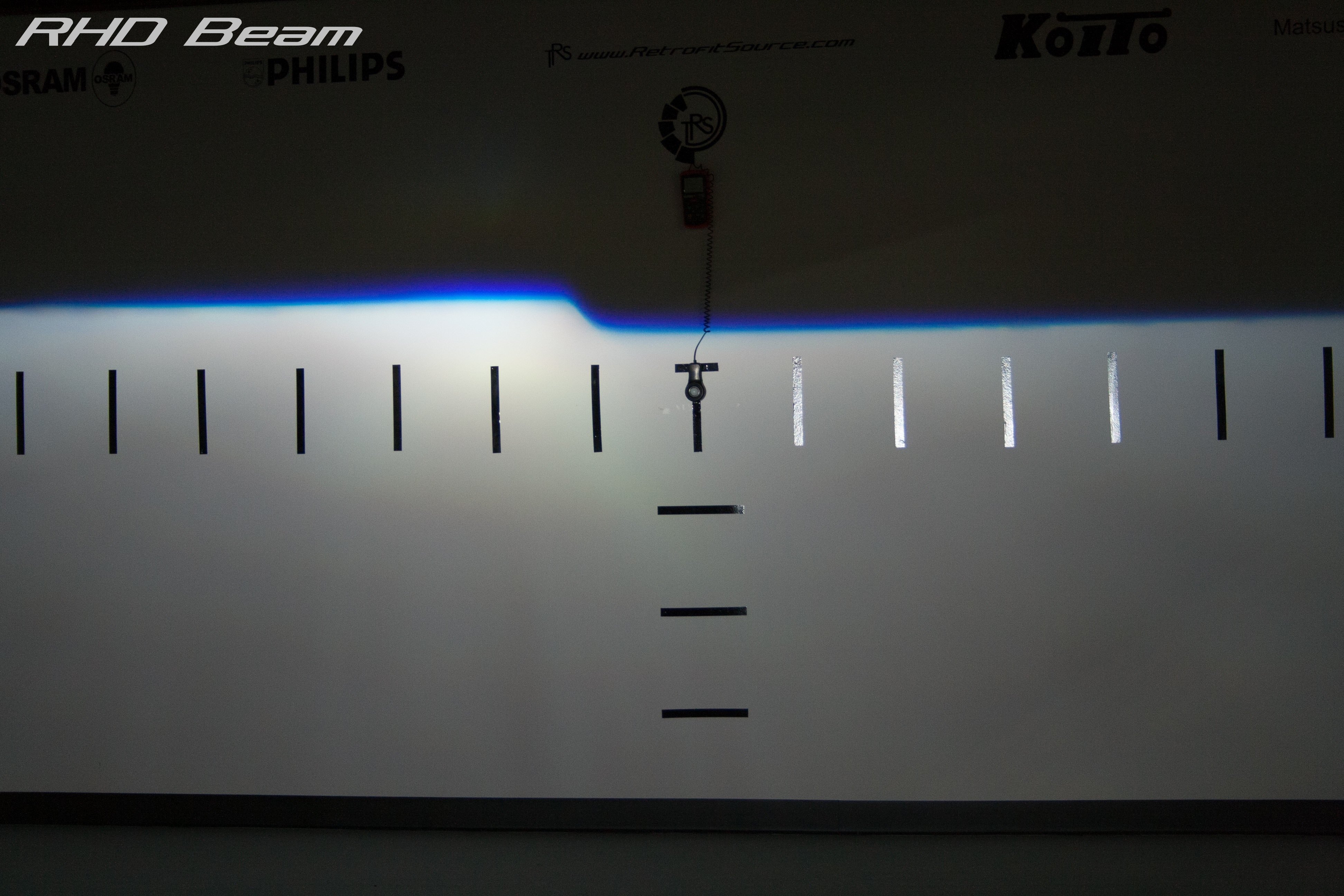 Why are some projectors so expensive?

Is price or performance more of a concern? When it comes to OEM projectors, simple corollary here is that performance = demand = price. It’s hard to find a pair of OEM Honda S2000 projectors because they’re in such high demand as a result of their superior low beam output. If you do manage to get your hands on pair, expect to pay $300- 400 for them. OEM S2000 projectors will easily go for 3x more than a pair of undesirable Bosch/E46 projectors would. Other expensive projectors include Lexus SC430, LS430, 460, and RX350 for their rarity, and intense uniform and wide beam patterns, Acura TSX’s and TL’s for their good output in stock form. Here, it’s mostly about exclusivity and perfection. Aftermarket projectors usually pack more “bang for the buck” like the FX-R or Morimoto Minis. They cost much less because they’re readily available, but realistically still out-perform many of the more common OEM projectors.

Most projectors come from the factory with fresnel or cloudy optical lenses. These “detuned” lenses never let the projectors perform to their full potential. They put a damper on the degree of sharpness, color, and light intensity produced by the projectors. Some projectors come stock with better quality optically clear lenses, but even these can be improved upon (ie TSX). Think of a projector just like any other original part on your car, of course there will always be an aftermarket performance/aesthetic upgrade available (ie lens swap). A clear lens upgrade is like replacing your intake and exhaust with a high flow setup, but for headlights!

There are some important things to look for in buying a set of projectors. We cannot stress how important it is to buy your projectors from a reputable source. Too often we get inquiries from individuals who come to us looking for spare projector parts because the set they thought they were getting a good deal on didn’t come complete or had ruined parts. Make sure the bulb clips, cutoff shields, solenoid wiring are included. Make sure your lenses aren’t cracked, and make sure the reflector bowls aren’t tarnished, and your getting a true left/right pair. For aftermarket projectors like FX-R’s or Mini’s – make sure you’re getting the absolute latest version and that it’s not a cheaper/generic knock off. Aftermarket projectors often need additional tuning after they’re manufactured to ensure their beams are corrected for focus/sharpness, etc. Buy from TRS and you don’t have to worry about any of the above. 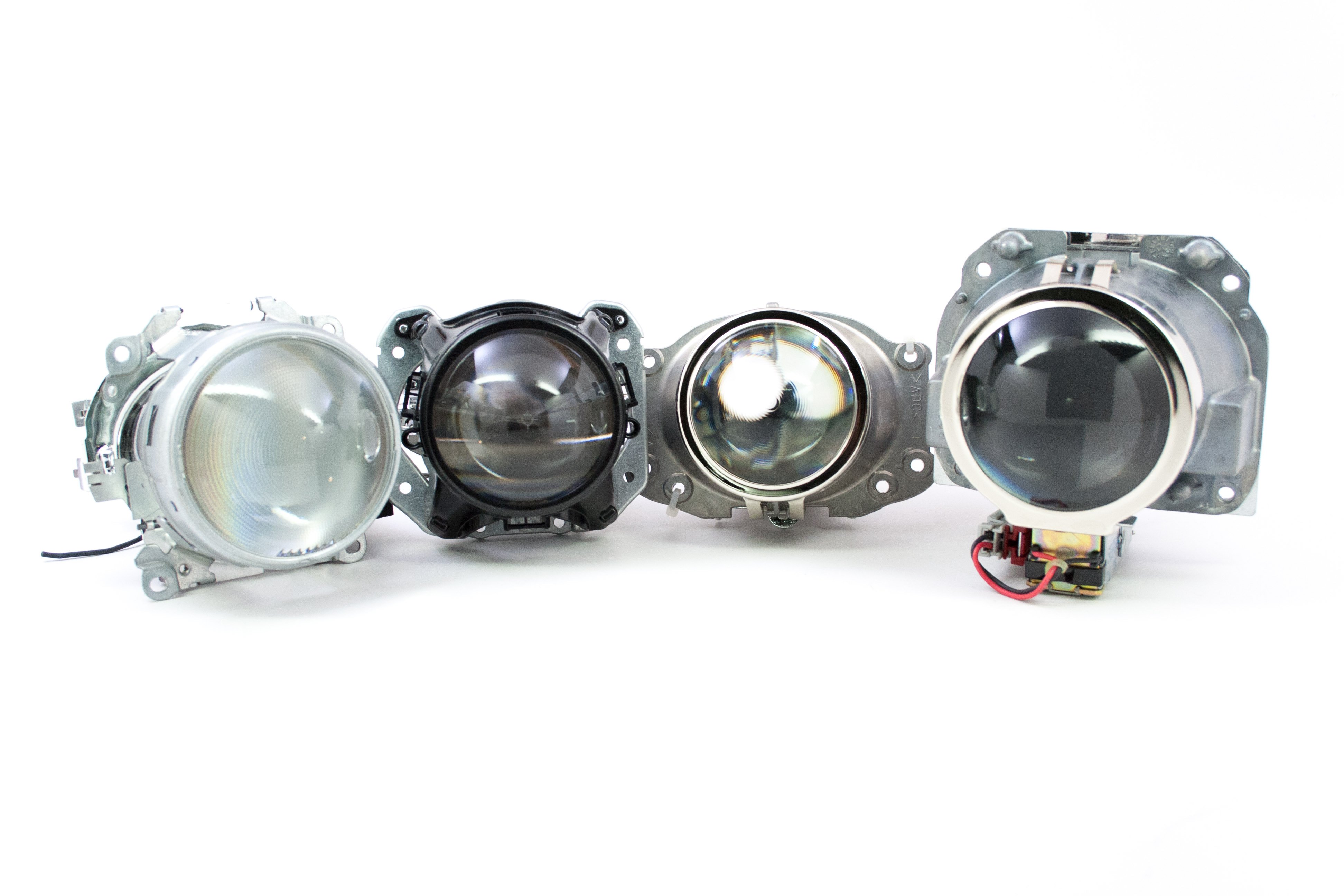 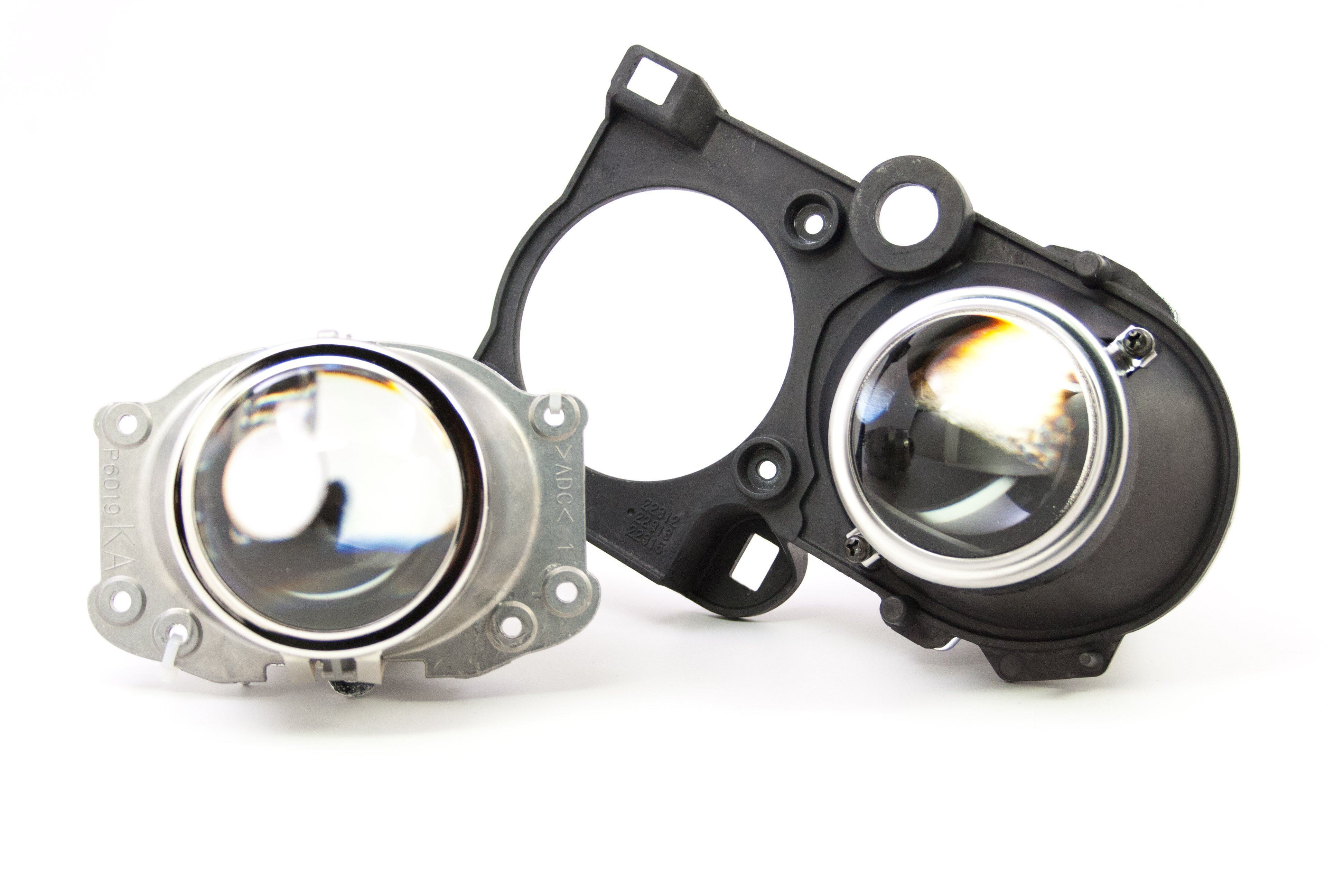 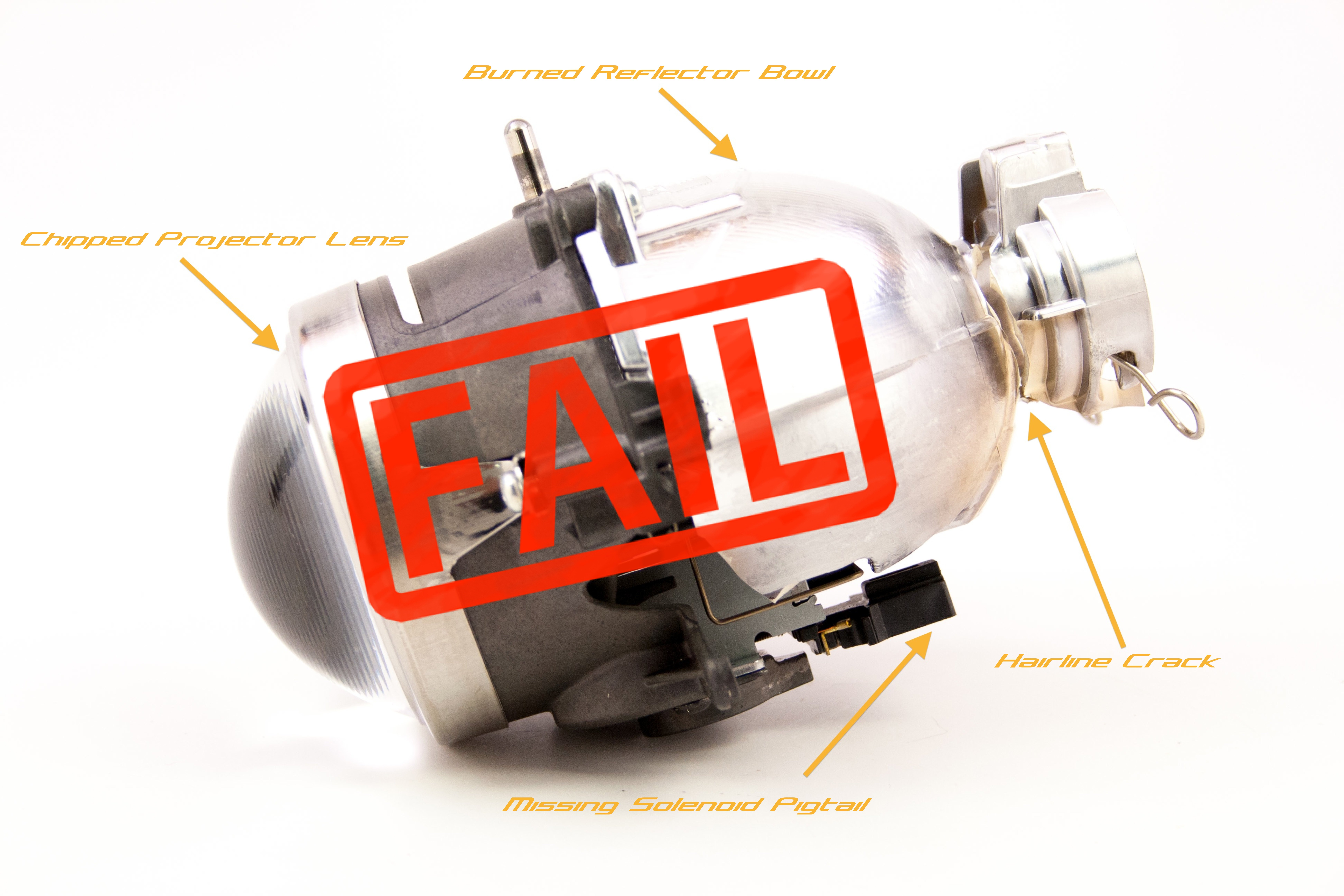